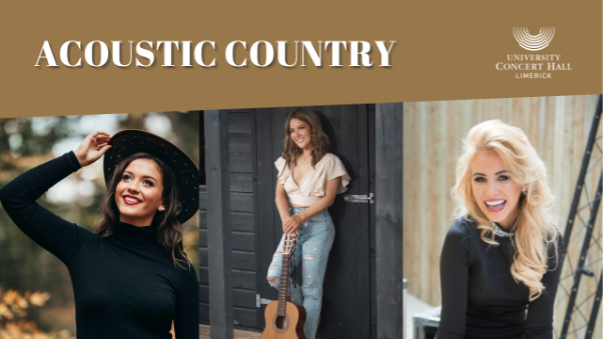 University Concert Hall (UCH) is delighted to present its three-part concert series, Acoustic Country, with a live audience for the first time. This concert series will bring three of the brightest female stars on Ireland’s country music scene to Limerick. The concerts take place this Autumn from September to November.

Clodagh Lawlor is one of Ireland’s youngest, award-winning country music stars.  Well-known for debuting her career on RTÉ’s The Late Late Show with Nathan Carter, Clodagh’s career has since flourished. Following a tour with The Young Irelanders in Canada and the United States, Clodagh has since worked and performed alongside the biggest names in the Irish country music scene, proving that this County Clare native was made for the stage.

Renowned country music star, Cliona Hagan will bring our series to a close. Cliona was named Sunday World Female Vocalist of the Year for four years in a row! In 2019 Cliona reached the finale of RTÉ’s Dancing with the Stars.  It also saw the double-release of her latest album Little Darlin and new DVD Travelling Shoes. Cliona also teamed up with Derek Ryan for the hit song Only Getting Started which rocketed to number 1 on the Irish iTunes Country Chart in less than 24 hours! Cliona has supported the likes of Nathan Carter, Derek Ryan and Mike Denver in concerts across Europe.